So everyone who is complaining they are lying according to your findings, they just tested few headphones , This report is really prepared well wish you spent time to find a solution, obviously there is lost of ANC and this Pressure feeling. With that report Im done with Bose, not a Bose customer anymore because it is a Joke.

That's a lot of detail for something that doesn't really help us. Ok just one thing actually, you're letting us downgrade again - that might actually help (could have done this 9 months ago but ok, coolsies). I did enjoy the part where someone had sent you a pair with aftermarket earcushions, or did they? 😉

But it would have been good if Bose support actually read our comments here and noticed the best working firmwares were from 3.1.9 and under, not between the last two recent ones! Both of those updates have shown issues in ANC.

Pity you're already burnt Bose, this downgrade option and report would have been seen in a better light if you got to us earlier - most of us have already shifted over to better companies.

noooope, never mind about my positive note on the downgrade - you're not letting us go revert back to the working firmwares (3.x.x or 2.x.x).

Mmm.. kinda upset with your findings.

Enough said, I will let your authorized service center/etc to test my QC35 II.

I have been calling the number since last week, due to the local gov lockdown, NO one is answering the phone or email. you may try - https://www.bose.my/en_my/contact_us.html

Will just try again after the lockdown.

Hi - bought my QC35 II back in 2017. They have been fantastic up until last week when I upgraded from firmware V3 to 4.5.2. Wish I had searched before pressing the upgrade button.

Immediately I noticed a huge difference - I can hear everyone in the office talking/TV's/music etc. There is very little difference between on and off.

The Bose report is going against all third party investigations which is incredibly disappointing. Hopefully they work something out or allow us to downgrade to v3.

Thank you for your comments so far! We really appreciate the conversation around the work we did into investigating your reports.

I wanted provide some clarification regarding of the comments and questions we’ve seen around testing.

We hope this gives you more insight into the details of our rigorous testing process!

Feel more. Do more. Be more.
Come check out my profile here. New to the community? Check out the Getting Started board.
Help others find answers to your questions by clicking on 'Accept as Solution' at the bottom of a reply. If you see a post you like, make sure to give it a thumbs up!
0 Likes
Reply
Share

I have been following these topics with great interest as I was on 3.1.8 and hadn't updated on a set manufactured in September 2017, serial number ending in AE. I was pretty scared of updating even, because of all the negative comments I've seen about the later updates.

I was pretty happy to see this in-depth explanation of the testing procedures by Bose. It made me more comfortable to try out the upgrade. I tried to update through the Bose Connect app but had issues with it for some reason, so I plugged into my Windows machine and used BTU to update from 3.1.8 to 4.5.2.

Post update, my ANC seems to be the same as it was before. There is still a clear distinction between Off, Low, and High ANC. It seems to have the same level of noise cancelling that it had immediately prior to the update (I was basically testing at home with kids and dogs around, fans running, clicking and typing on computer, etc.). Seems like I dodged whatever bullet people are getting hit by.

Not saying this to downplay anyone else's experiences or issues they are having, just to add a voice that not every person is having the same issues. Thanks, Wayne, for all the effort and expenses you have spent on researching this issue.

A YouTuber observed the following differences:

I own a pair of 35c ii currently running ver.4.3.6 if I wanted to downgrade the firmware to test for any appreciable differences in ANC how would I go about this? 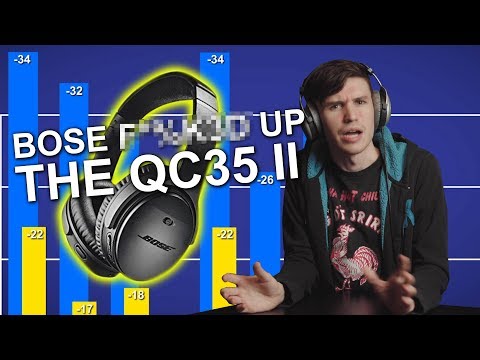 Bose Update RUINS Noise Cancelling??? (TESTED)
youtu.be/yyC9QStmzcA
Did the recent update from bose make noise cancelling worse? In this video I test that to find out. My social media: https://twitter.com/dms3tvhttps://Instag...
0 Likes
Reply
Share

Wayne, To me your report is a real joke. Why you prepared the findings and let us know you have found no errors? We are not accepting your feedback. Definitely ANC is totally gone and you are letting us know you have not changed anything? You are entertaining us and you have lost all your valued customers. We are just asking to let us downgrade to the reliable firmware which you have failed us.

What kind of customer service is this? I called and emailed to bose few months ago asking what is the solution, Your people claimed that my qc35 had spoiled and offered me 20% discount for the new 700. FYI, I only used my qc35 once in every 4,5 month or even more. I never blasted my headsets. Even until now, I have my wrappers on it too. But your people claimed that I spoiled it. It is ridiculous and I really can’t accept that.

The problem is the headsets have no pressure and can’t hear noises surrounding. So what? This case will be closed now? Until notice? Good luck in selling your 700 and I’m sure your valued customers will go for Sony..

Wayne, here are my thoughts about Boses report:
Boses investigation report is a complete farce because firmware 4.1.3 update to 4.5.2 makes no difference anyhow. By the way a test sample size of 10 pcs related to the number of total customer claims is not representative at all but only an unprofessional action.

Instead the report should show THE REAL ISSUE with firmware 2.x.x thru 3.x.x update to 4.5.2 in comparison. See the graph image provided by matt2020 on youtube. However Bose simply ignores third party reports and customers claims without fixing the FW issue. Everbody can check with an acoustic measurement app voice attenuation is -26dB only but Bose can't?
Advertising "world class NOISE cancelling" and VOICE cancelling "Open office plans ... and distraction ... employees in open offices were bothered by noise, including the conversations of their co-workers ..." is no more true on all items QC 35 incl. NC 700. So there is no meaning in replacing headphones with the same FW again if you don't believe in placebo effect.
What we need:
(1) Downgrade options from 4.x.x down to 3.x.x and 2.x.x at least for QC 35.x customers
(2) Revised NC update/upgrade from firmware 4.5.2 to 5.x.x in order to meet Boses claims as advertised and customers claims equally.
(3) Revised NC low/high settings that make really significant difference.
Bose please provide constructive answers.
Thanks.