Thanks for asking about support for my claim that most audiologists fail to go the whole way in testing what actually comes out of purchased hearing aids, rather than just assuming that what the manufacturer (or more likely, distributor) sends was actually carefully tested to make sure it met the hearing loss curve.

I was skeptical at first and checked out several other of his videos. As a natural born skeptic-at three years old, I argued with my Grandmother about errors in Biblical passages, started engineering later in life and was in product development for years, then became a litigation attorney-I am far too familiar with the wild claims and out right frauds practiced by some doctors-I was not very receptive, at first, of Dr. Cliff's claims.

But his audiological curves and later, his critique of Hearphones (they lack the ability to eliminate feedback, which makes them, as you suggest, inappropriate for profound hearing loss), convinced me that he was up front and knew very well what he is talking about: Hearphones CAN be adjusted to match the curve needed very well, a pleasant surprise to me, too. And I, too, noticed the feedback problem. Turns out you can't eliminate that without eliminating noise cancelling, which I prefer.

I agree, they are large enough and obvious enough to present some social considerations. My hearing loss is considerable, my tinnitis extreme, but past experiences have taught me that the primary concern of the audiologists I have gone to was to push me into buying hearing aid rather than being highly trained professionals who, like 99% of doctors, genuinely care. I always felt like the mark walking into a car lot, "how much can you afford to pay a month?" was sitting right there on the lips.

There is also a vanity aspect; behind the ears are "more hidden," but still mark the user as an old deaf guy to far too many folk. And from what I've noticed with my friends, they don't really improve hearing all that much. Maybe they went to wrong audiologist?

That said, when I finally decide to get a pair of "real" hearing aids, the first question I will ask is whether they run the tests the Dr. Cliff Olson does: in-the-ear canal, post fitting tests with an oscilloscope like graph showing exactly what my hearing loss is, and how well the hearing aids, after adjustment, match the loss.

Oh, so that's what you meant! I think it's true -- audiologists configure the hearing aid to fit the curve, but then do not perform another hearing test to make sure that the correction is near-perfect. Would that be covered by insurance? 😉 I'm sure it's far better than not configuring the hearing aid.

But how can the Hearphones be adjusted to fit one's personal hearing curve? Now that would be important to know!

You would really enjoy watching Dr. Cliff Olson's video on You Tube, link is:

copy and paste into your browser, or search for him on You Tube, etc.

As to how to adjust the Hearphones, either find an audiologist who does the correct thing, or do the next best and simply (like I do) adjust until the sound is better.

I do notice however that if I adjust the "World" setting up high enough to really be good, I get feedback. So I accept less than the best.OK by me! 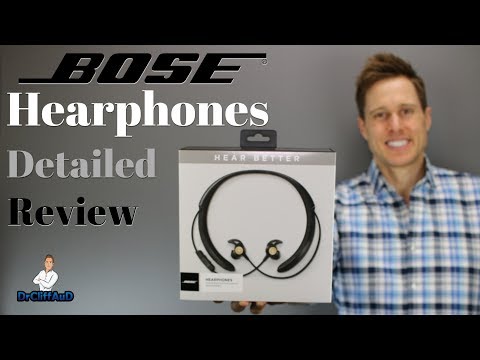 Let me get this straight: you discredit audiologists because after configuring hearing aids to a person's hearing curve, they usually don't retest the person's hearing to make sure that it is properly corrected, yet in the case of Hearphones, you're content to "adjust until it sounds better"?! And how does one do this effectively (and accurately), given that there's only one control for BOTH bass and treble?

"And from what I've noticed with my friends, they don't really improve hearing all that much. Maybe they went to wrong audiologist?"

Message 25 of 32
No hearing aid can replace natural hearing. You can't expect that. I use a single hearing aid in most situations just to boost my hearing enough to follow conversations in normal surroundings. I'll wear my Hearphones when a) I want a richer sound boost or b) when I know I'll be in a noisy place and need to focus my hearing.
3 Likes
Reply
Share

Excuse me, but nowhere did I suggest that a hearing aid can replace natural hearing.

I tried the Hear One headphones. Good for music, not for sound enhancement. Terrible battery life. The company did not survive.

Another fun, if somewhat sneaky, thing to do is to pretend you're listening to something else, or on a phone call, but actually listen to see what people are talking about when they think you can't hear them. This works with the QC30, too, but the Hearphones' enhancement lets you hear all the better. Then imagine their surprise when you suddenly comment on something they've said. If nothing else, doing this even once will certainly cure them (and you) of assuming that somene wearing earphones can't hear you or isn't listening.

Message 29 of 32
Sounds like my story. I used to wear expensive hearing aids. I don’t like wearing them. The Bose hearphones have their own set of challenges, but the gain I get outweighs those issues.
6 Likes
Reply
Share

Last night I was out playing music at one of my regular noisy haunts. I managed to get there without my Bose Hearphones. Between sets I did my usual wander through to visit with people. I was back to leaning-in with my head turned to hear. One person objected because I wouldn't look at her directly as she spoke.  This was a stark reminder of how things are different with my Bose Hearphones.

How are you doing in social situations with your Bose Hearphones?