Phantom power doesn't draw that much from the battery compared to the amp.  It was a SERIOUS oversight not to include it in the S1 (and, to be fair, the JBL EON ONE doesn't have phantom either)...one that has made my performing life a bit more complex and expensive...

Used 2 S1s for the gig - left them plugged in because it was a 5 hour gig.

Gig was a farmer's market - the space a lawn about 100 yards wide by 50 yards deep, set up on a stage in the center of one of the long sides, had each S1 behind and to each side of the band (3 vocals, 2 guitars) pointed outward about 45 degrees.  Heard them fine on stage, walked the areas on a break (playing music - phone bluetooth to S1s) and could hear well throughout the Market.

Got great reviews (and tips) and we were asked to return.

A single 8" driver, even if it has a whizzer cone, like the Roland AC series acoustic chorus amplifiers, will not produce as crisp high frequencies as the Bose S1 Pro. Even the Roland AC series acoustic chorus dual drivers are mounted slightly off axis. The Bose S1 Pro tweeter array will fill the room more evenly with sound. My TU04 mixer I purchased on Wish is powered with a USB Power Bank battery for portability and adds extra channels, more EQ, +48V phantom power, USB thumb drive input and a built in BlueTooth channel. It's a great solution to use with my Bose S1 Pro. Mine took 3 weeks to arrive. Here's the same mixer, with a different model number, from another source:

I power it with a USB Power Bank, similar to this: The proof will be in the sound quality difference. But still, Bose should be paying attention to this.

The real test will be the quality of sound compared between the two units. I’ve rarely been disappointed with the Bose sound. Other competitors haven’t come close. However, this JBL unit has got my attention.

I have one on order that should be in by the end of the month. I’m really intrigued by it. I love my S1Pros but I’m also a speaker addict. I don’t think it will replace my S1Pro for wedding ceremony speakers but I might use it for cocktails. I’ll give my review once I receive it.

A single 8" driver, even if it has a whizzer cone, like the Roland AC series acoustic chorus amplifiers, will not produce as crisp high frequencies as the Bose S1 Pro. 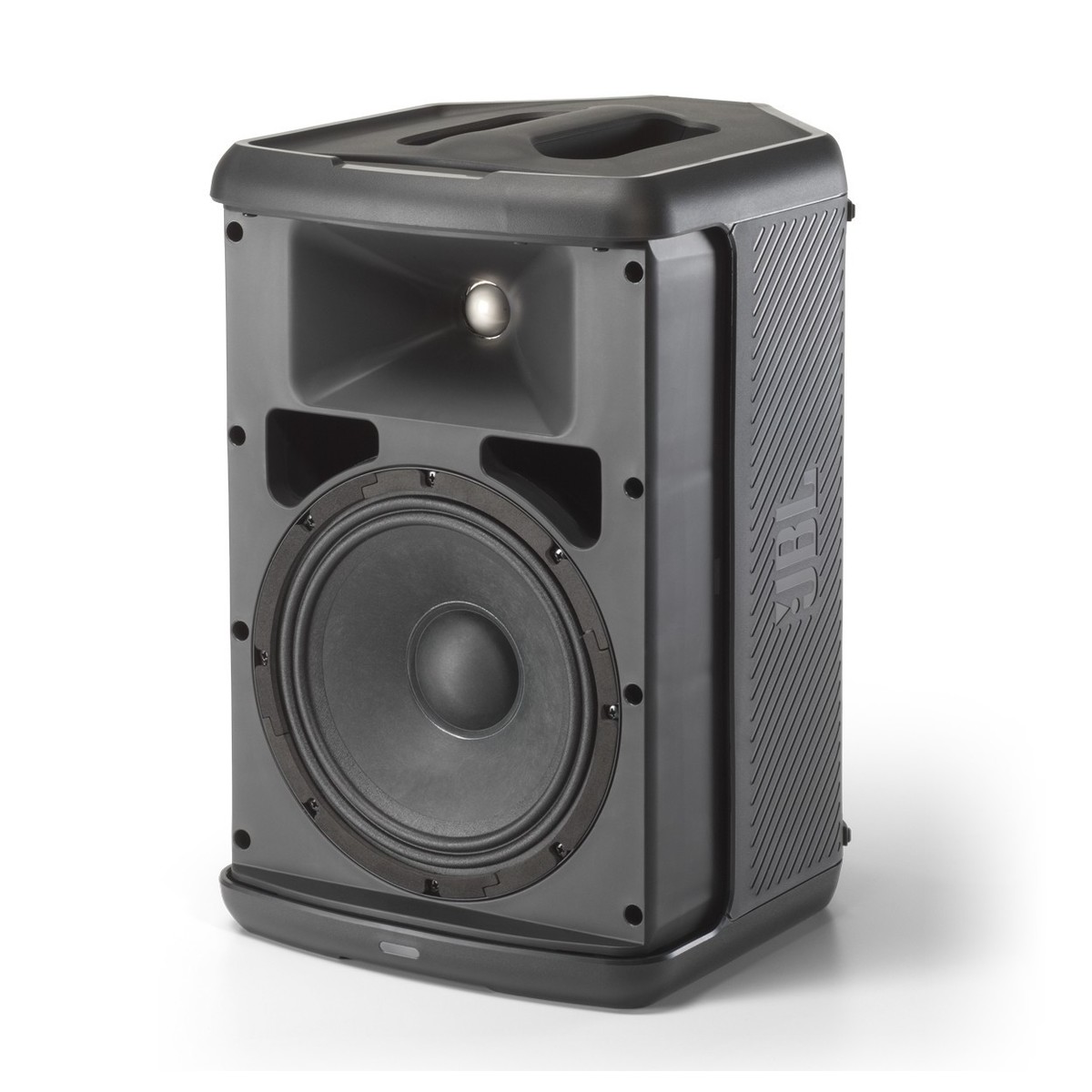 I don't think a QSC K8.2 that is a traditional 2-way speaker sound less good than a Bose. It does not have the widespread "throw", but it does not sound worse.

Here is a measurement of the S1 response. You can see a bump between 100 and 200 Hz. Everytime I've tried the S1 I could hear it. 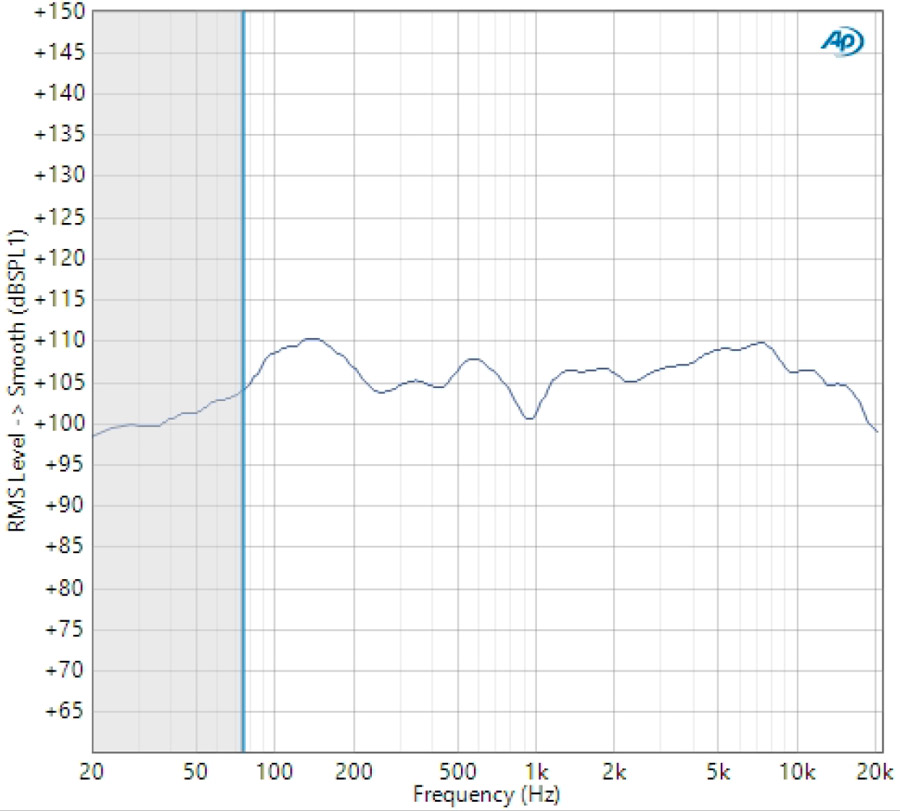 I am not saying the Bose S1 is bad. It has its own sound, the Bose sound. One might like it or not. The JBL eon one and eon pro are clearly JBL take on the Bose sound. I've read magazines with spectrum measurements that show "similarities" such as a clear roll-off on the high end of the spectrum that gives that "sweet sound". Bose does not feature the tweeter harshness that some 2-way speaker design might experience.

The JBL eon one compact is clearly a 2-way speaker. So JBL is hunting on the same market as Bose but it is less a "copy" than the previous JBL "mini line arrays" that had angled arrays. They want to capture the people who want more low-end, more high-end, a more focused beam and some extra features. I think it is a good thing to have more competition in that market. 3 years ago, we only had heavy speakers with built-in rollers and lead-acid batteries...

NB: When JBL released the "eon one", I read on the acoustic guitar forum, that people were very disappointed by the lack of "gain" on the inputs... When JBL "eon one pro" came out, some units went really hot. So let's wait and see, all manufacturers have problems.

Thanks Cuki 79 for the link to the article. English translation was a little weird, but still an interesting evaluation of the S1.

Since I've always used a mixer with my JBL EON ONE its lack of overall gain in each channel hasn't been an issue.

I also have to use a mixer with the S1s for the same reason -- not enough overall gain in the input channels.

And of course, since neither have Phantom power...  😞

I use a mixer with my L1 compact and S1. They are made to handle it. But why the need for phantom power? I've never needed phantom power.

I use a mixer with my L1 compact and S1. They are made to handle it. But why the need for phantom power? I've never needed phantom power.

*Phantom power, in the context of professional audio equipment, is DC electric power transmitted through microphone cables to operate microphones that contain active electronic circuitry.[1] It is best known as a convenient power source for condenser microphones, though many active direct boxes also use it. The technique is also used in other applications where power supply and signal communication take place over the same wires.

Phantom power supplies are often built into mixing consoles, microphone preamplifiers and similar equipment. In addition to powering the circuitry of a microphone, traditional condenser microphones also use phantom power for polarizing the microphone's transducer element.