This may seem a pretty daft question but it has actually got me in mixed minds so I am putting it out there to gauge how you guys would do it....

I am doing a gig in a village hall on Saturday, I've been to look at the hall because lets face it, these old village halls are renowned for dodgy electrics and access etc, but this one is pretty smart as it goes.

It is an odd shaped room, I have posted a picture of the hall to give an example, the stage is in the far left corner which means anybody at the extreme right of the room will not have view of the stage!

The ceiling on the stage is low but is just about high enough to accommodate my Model 2 if I decide to take that although it will be tight!!

They aren't expecting any more than around 75 people so it isn't a huge crowd and as it's a country club it won't be particularly noisy.

So how would you guys handle this sort of gig?

Either Model 2/B2 on stage behind me or both Compacts placed to fill the odd shape of the room.

I don't generally need to ask such a dumb question, I generally always use the Model 2 at just about every gig but the shape of this hall is actually making me think that this could be one of those rare occasions where the Compacts come into their own.

I am sure the M2 on it's own would fill every corner of the hall even if placed behind me on stage but I am sort of thinking that in this venue the two Compacts might be a better option.

As ever I am happy for any feedback.

M2 for hall next to stairs, one compact for monitor?

I’ll be anxious to hear what folks think about this question. IMHO I would lean towards the L1M2 on the stage positioned to cover the bulk of the hall daisy chained with a L1 Compact pointing off to the stairs side of the stage covering that area.

Thanks for the interesting question. I found your venue.

The hall has a sprung wooden floor the area of which is 162 square metres. The capacity is 200 guests standing and 150 seated and also an extended stage area.

For 162 square meters and 75 people, depending on the nature of your show (solo or band?), you're probably fine with two L1 Compacts as you suggested.

However, I'd probably use one L1 Compact on the stage as a monitor (no need to run loud) and put the L1 Model II with B2 here.

The picture looks like the L1 is canted diagonally, but I'd aim it straight into the room in line with the wooden floor slats.

Two L1 Compacts might be fine but using the L1 on the floor is a no-regrets option.

I looked at some of your earlier posts.  Do you still have a T1, ToneMatch Power Supply and an S1 Pro system?

Maybe you can use the S1 Pro as your monitor if you want to travel a little lighter. Although, I always carry an L1 Compact in the boot as a backup for every show.

Then you can run the T1 Master Output to the S1 Pro. I'm sure you know how to do that.

For those reading along you can use a network cable in place of the ToneMatch cable in the image below. 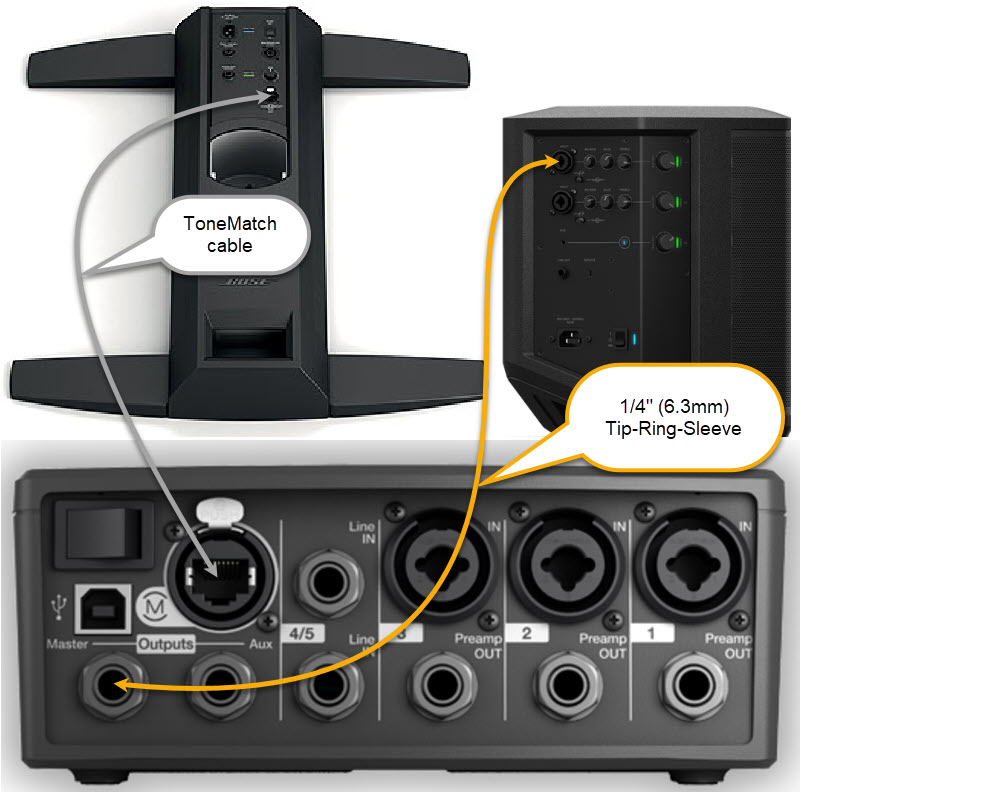 Yes I still have my T1 and S1 Pro, would never get rid of that stuff!

I had thought of using the S1 on stage and placing the L1M2 on the floor similar to how you have suggested.

I did a New Year Eve gig similar to this although it was a more square hall.

I popped the L1M2 toward the front of the stage just off axis to my mic then popped the S1 on a tripod aiming slightly inward and used it to paint sound across the stage area which was great for monitoring, tempted to follow the same set up for Saturday with the L1M2 on the floor.

I will be playing solo with backing tracks and live guitar/banjo/mandolin.

As I said it's a country club so I will be playing traditional American country (Haggard, Williams, Cash, Jennings etc) so I isn't going to be a particularly loud gig.

Thanks for all the feedback guys.

I will let you all know how the gig goes and will post some pics showing how I finally set things up.

l1 on stage behind me to the left of the stage face diagonal up the room.

Why not 2 stacks placed differently (one on the stage / one on the floor behind the blind bit?

looking at the room it is a large space of shiny echoic materials that will reflect sound of the floor, ceiling and walls.

Running two systems in completely different locations within the same room is going to develop a mush mash of reflections from multiple sources that may make the resultant sound - original source and reflected source become an uncomfortable mess.

from a single source, your L1 should be sufficient as the height was originally designed to travel to the back over heads of dancers.

I’d even be tempted to run a 5M cable to the B2 sitting on the floor not the stage as stages can become a resonant box enhancing and muddying bass. I have two 5M B2 cables to run with my two L1’s and the ability to hide them or place them for maximum effect is brilliant.

In a large venue with big dance floor I place them both at the front of the stage on their sides and get rid of the power tunnel voiding bass on the dance floor.

Get there early, try out both options...?

Interesting ideas here. Of course we can suggest all day, but the proof is in what actually works. So we’d love to hear what you wind up doing and how it went.

I will say I’ve used the S1 along with my L1M2 2 B1s where the room was a L shape. Pointing the L1 down the larger part of the L and the S1 off to the side point at 90 degrees to the L1. That area was smaller so the S1 was plenty of sound for that section. I ran a XLR aux out from my mixer to the S1 and ran it on battery.

Just throwing out another idea for the future. I now have a Xvive U3 with the mic/line switch set to line where I can run the connection from the mixer to the S1 wirelessly providing very flexible placement of the S1 (on battery) with no cabling or power cords to be concerned about.