Recently I purchased the Soundbar 700 along with a pair of surround speakers and the Bass Module 700.  Since day 1, even at low volumes and the bass adjusted as far as it can go into the negative, the Bass Module constantly rattles.  At first, I thought that perhaps it was my placement near an audio tower that houses my Xbox, DVR, some dvds, etc., and kind of dismissed it as a potentially awesome side effect of such a powerful subwoofer.  However, after factory resetting my system more times than anyone should have to in the life of a premium sound system (let alone in one month) I am strongly considering returning everything and switching to ANYTHING else.  Yes, I have run AdaptIQ calibration (over, and over, and over)...yes, I have moved the Bass Module away from all possible sources of interference...yes, it's against a wall...I lifted it in the air just to see if maybe my floor could somehow be the culprit...still the Bass Module.

There is a link below to a video of the ever-present rattle.  I own other Bose products, and when I started shopping around for a new sound system a couple months back my satisfaction with my Bose Solo 5 really pushed me over the edge and was the reason I decided to invest in this system.  When I bought the Solo 5 I was on a tighter budget, but still wanted premium sound.  Boy did that thing deliver!

And so a month ago when I graduated from a $250 Solo 5 to a $2500 Soundbar 700 full surround system, I assumed I would be getting 10x the quality and performance.  Instead, I have spent more time resetting and trying to fix my system than I have spent using it...oh and it's still rattling. 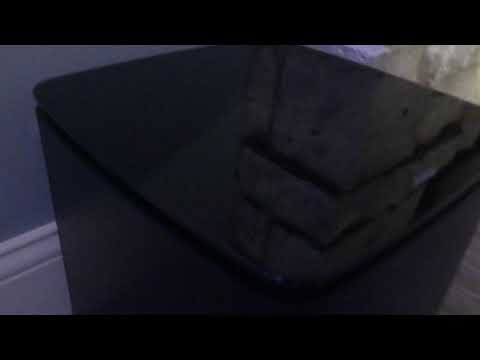 Bose Bass Module 700 - CONSTANT RATTLING!
youtu.be/9khpsgDOXP0
Volume is at about 10-15% and it is still that loud!!
1 Like
Share
3 REPLIES 3
Highlighted

Thanks for the post, and I'm sorry to hear about the difficulties you're having with your system.

I listened to the audio in your YouTube video, and it sounds like there is something wrong with the Bass Module.

Where did you purchase it from?  You may be able to swap it out for a brand new one wherever you purchased it.  If you're not able to, please contact your local support center via phone in order to arrange for a replacement.  Just select THIS link, choose your country, and scroll to the bottom of the page to "Contact Us"

Please let us know if you have any other questions.

Not applicable
Registered since

I've had the Sountouch 300 with the Acoustimass 300 Wireless Bass Module hooked up and calibrated for nearly a year and it has worked fine. Mostly sound for TV and occasional music. It has never been turned up to anything resembling high volumne. Over the last couple of weeks the bass module has begun making a rattling, non-high fidelity sound. It is doing it now during the Saints/Cowboys Thursday Night Football game. I have move it. I've picked it up during this noise and it continues. It is not its location or anything near it. It is (un)clearly coming from the speaker. It has done this a number of times during TV/movies. It was first noticed while playing music during a gathering 11/21.

Why would this be happening and what steps can be taken to fix it?

Thank you for the post and welcome to the Bose Community.

I'm sorry to see that you're running into these rattling issue with your Acoustimass 300, but I'd like to help.

Since you have tried everything I would suggest trying, the next step would be contacting technical support via the phone.

If you go HERE, select your region, scroll to the bottom of the page, choose "Contact Us" and a phone number will be displayed.

Let me know how everything works out.