Just purchased a 500 a week ago. Very happy with it initially, no problems. Now all of a sudden I keep getting "Unknown Track" for songs and playlists I have had no difficulty playing before. This includes the preset playlists my wife programmed and also random songs on spotify. Some of my playlists still work on spotify though. No recent software updates on anything... what could be causing this problem? Super frustrating to get caught having to stare at my phone for a half hour trying to figure out to play music again.

Welcome to the community! I am sorry to hear that you are experiencing some issues with playing tracks on your Home Speaker 500.

So that I can assist you with this matter, can you please inform us of the following information.

Do let us know, we would love to do what we can to get this resolved for you.

Feel more. Do more. Be more.
Come check out my profile here. New to the community? Check out our Community Guidelines and How to use the Bose Community for helpful hints on getting started. And don't forget to check out our new and improved Community Ranks and Rewards!
0 Likes
Reply
Share

Hi there Tegan or whoever gets round to responding to this, obviously I am not the original poster but he/she seemingly didn't respond and I can't find anywhere else mentioning this problem which I myself am experiencing.

To answer your question, yes it happens with all music platforms. For example, I can request a song on spotify and it will say playing x song and continue to not play it, same with tune in or amazon music. This is why I think it is an issue on Bose's side rather than anything else.

For the second question, no, it doesn't play but rather just says unknown track on the app whether the request be for Spotify or tunein etc despite saying it has identified the track and will now play it.

For the third question, on yes it is on the Bose music app where it jumps/glitches repeatedly flickering unknown track over and over, though this is happening when I'm using alexa voice commands. It doesn't happen constantly but on a daily basis and the only way I've found I can temporarily fix it is by spam pressing play a particular playlist in Spotify until it eventually does play a song at which point the unknown track glitch temporarily stops, but the functionality is limited eg trying to play different playlists will cause the glitch to reoccur

Any insight as to why this is happening and how it can be resolved would be great as I am considering returning the product otherwise as it is obviously very frustrating as using it for Spotify was the prime reason I bought the product. Thanks in advance.

Hey, thanks for joining the discussion.

Are you able to provide screenshots of your application when this happens? Have you tried any prior troubleshooting before posting? A great starting point is to always go through a quick power cycle - disconnecting both the internet router and speaker. Leave both disconnected for at least one minute to drain of power, then reconnect the router back to power. Allow the router to regain internet access, which can sometimes take up to 5 minutes, then reconnect the speaker back to power.

Do you have any other devices within your home that also use the Bose Music application to control the speaker? It would be interesting to note if you created a new Bose Music account, by signing out of your current account, or signing-into a new account on a secondary device, and associating the speaker to the app, if the issue still remains.

Feel more. Do more. Be more.
Come check out my profile here. New to the community? Check out the Getting Started board.
Help others find answers to your questions by clicking on 'Accept as Solution' at the bottom of a reply.
If you see a post you like, make sure to give it a thumbs up!
0 Likes
Reply
Share

Hi Andy, thanks for the quick response. I've attached screenshots of what is occurring on the Bose music app - it simply flickers between these two statements extremely rapidly whilst not playing the music it says it has found/will play. Same is true for tunein, amazon music etc.

I have tried the power cycle to no avail. There are no other devices in the house with bose music app/connected to the device. Any help would be appreciated once again, thanks 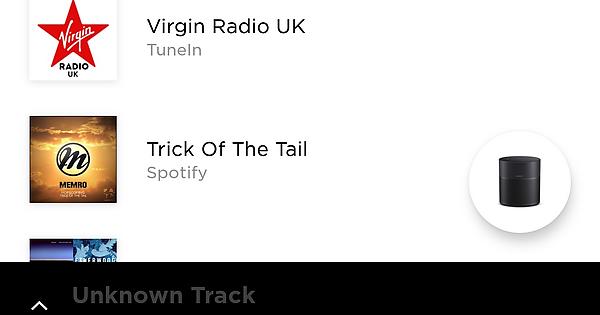 Forgot to mention, occasional error messages like this will arise when spam clicking the play playlist button in attempts to get it to overcome the glitch though I'm not sure if it's relevant to the glitch cause itself as I couldn't find anything saying what it meant.

@User-07398, sorry about this. We would love to explore this more with you. Please reach out to your local customer support center and they will be able to take some more details on this. You can do this by clicking this link here, selecting your region, scrolling to the bottom of the page, and selecting contact us. If you are in the US or UK you can also reach out via Facebook or Twitter and one of our team can help you there.

Feel more. Do more. Be more.
Come check out my profile here. New to the community? Check out the Getting Started board.
Help others find answers to your questions by clicking on 'Accept as Solution' at the bottom of a reply.
If you see a post you like, make sure to give it a thumbs up!
0 Likes
Reply
Share
New Topic